(watch the video at the end)

Here’s an interesting one:  Malawi’s justice and constitutional affairs minister George Chaponda tried to make the citizen’s lives more enjoyable by trying to ban farting in public areas and making it a criminal offence.

He seemed quite passionate about the topic, saying “Would you like to see people farting in public anywhere? If people cannot control their farting they should go to the toilet instead of farting in public. Nature can be controlled… it becomes a nuisance if people fart 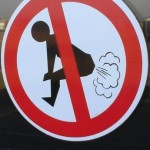 Nobody in Malawi has yet been arrested nor convicted for farting, as police do not enforce it. How would they? It could be pretty difficult proving someone is the culprit in a crowded area!

Personally, I just found it bizarre that a Justice Minister would use the word ‘fart’ five times in as many sentences in his interview. You think he would use a slightly more dignified term at least a few times 🙂

Anyway Chaponda has since had to retract his comments and admitted he had not read the proposed law before the interview, saying fouling air “does not necessarily mean farting” and that it will not be punishable by law in Malawi.

A big stink about nothing then…

3 Comments on “Please Don’t Fart Near Me (Video)”