After my recent article about Omega 3 I received the following question that I felt deserved a thorough answer.

The question was: “How much omega 3 is there in a cheap can of tuna?” 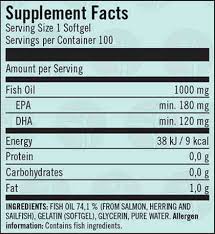 The source of the fished tuna also varies, with hook & line in colder water yielding a fresh, frozen and a purer option than the long line fishing done by larger commercial fisheries whose canning process is more prolonged. Combined with this, they add several additives and have repeated heating, which must, I believe, impact on the quality of the final protein product.

Glass containers are safer than cans and are available from Albacore, whose tuna may also be found in cans at a higher omega 3 content than its competitors. It is more expensive than the cheaper variety, obviously.

Which Fish Provide the Most Omega 3?

Tuna, by the way, is not the best source of EPA & DHA (omega 3 fatty acids) since it is higher up on the marine food chain, and therefore likely to have accumulated more mercury from the water than fish lower down the food chain, such as mackerel, herring and salmon.

The highest concentration of omega 3 fats (EPA/DHA) are derived from carnivorous fish which feed on plankton which is rich in alpha-linoleic acid, in the following order: mackerel -> herring -> trout -> salmon -> tuna -> sardines -> white fish.

While I prefer to consume fresh fish, this may not always be possible, so I supplement with daily 1100 mg of EPA/DHA.

Occasionally, I may have a tin of sardines with 2 eggs for lunch while at work!

Dr Nev is the Medical Director of the Leinster Clinic, a multidisciplinary Health Centre in Ireland.
He practices Conventional and Complimentary medicine, within a holistic context,
as well as providing Sports Injury & Sports Nutrition services. See his Blog here.

One Comment on “How Much Omega 3 is in Tuna?”