How familiar is this scenario: there is a book which you are dying to read. It sits on your bedside table, willing you to pick it up. You know that if you do, your family life as you know it will have to come to a standstill and your husband may disown you as he battles to raise your two children on his own.

But the time to spend buried in the book never materializes. So you try a few pages at night before bed. This either results in you staying up until ungodly hours and being incapable of functioning the next day, or, dopey with tiredness, you read the same sentence so many times you begin to wonder what was wrong with the writer.

The next time you have a moment to pick up where you left off, you have forgotten which character did what and so need to start again…? 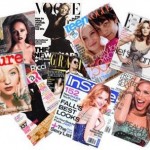 If this is ringing any bells and, like me, you are pained daily because the avid reader in you craves the literary input, but a cruel world has conspired to keep you away from the book, then I have Plan B.     Introducing, “ the magazine”!

Magazines are like the book’s poor relative, but the family resemblance brings at least a small amount of comfort. It suits the shorter concentration span of the working mom, it suits the time constraints of the woman who has at least been able to lock her kids out of the loo long enough to read an article, and perhaps even be able to attend to her ablutions as a bonus.

Magazines can be picked up and put down without having to hold all that information in an increasingly-addled brain.

Now, allow me to introduce the less illustrious cousin of the book club (which you may have had to drop out of due to, uh, not being able to read any of the books), Ta-Da, the Magazine Club!

Each member can buy their own fix of choice, whether their potion be fitness, home décor, self-help or fashion, and that will remain their property. At the Magazine club meeting (which may be a supper, lunch, eat-out, or homecooked), each member writes their own name at the top of the mag, underlined to show ownership and to whom it must be returned, then anyone may write their name underneath.

The magazine is passed from member to member until all who wanted to read it have had their turn, then it is returned to the owner.  Simple : about seven reads for the price of one, and a girls’ night thrown in too!

Get some great Discounted Magazine Subscriptions