I think a big hindrance to enjoying life is being hugely overweight. It prevents people from being able to do the most basic things they would normally enjoy doing.

Obesity is a huge problem in the world, and the number of people affected in increasing faster than their waistlines.

Some interesting news for the unmotivated:

Those are some staggering figures, and shows how little effort it takes to stay in some type of healthy state. 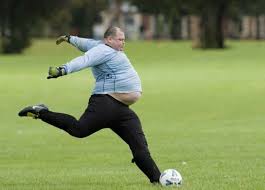 ( We have a great weight-loss program/Healthy Eating Program: Stop dieting and start eating with this fantastic program. Click here to have a look at it. You will also learn How to Lose Weight & Get Healthier without starving yourself, depleting your energy or spending a fortune.)

The unfortunate thing is that it’s affecting kids as well, which is something that could easily be prevented.

US researchers have found that obese children as young as seven years old have worrying symptoms linked to heart disease and heart attacks.

Mauras and colleagues studied 202 healthy children, 115 of them obese, and half of them past puberty.

The obese children had high levels of c-reactive protein which is linked to heart disease. They also had abnormally high levels of the blood-clotting compared to slimmer children of the same age and gender.

Mauras said “Doctors often do not treat obesity in children, but this practice should be reconsidered.”

Is child obesity a curable problem?  Is it lazy parenting? Is it just another by-product of the mtv generation ?

5 Comments on “Every Bit of Exercise Helps Your Heart”