Platforms like Netflix and YouTube Kids can seem like the ideal digital daycare for busy parents who appreciate the educational and age-appropriate offerings as a way to keep their kids entertained and engaged while they try to manage other parts of their hectic lives.

But as disturbing content starts slipping through the cracks of the “kid-friendly” filters, parents and experts are questioning just how much we can rely on these algorithmic black box babysitters.

The piece shed light on worrisome content appearing in child-safe searches, including creepy knock-offs of Nickelodeon’s PAW Patrol, a preschooler-aimed program about a group of problem-solving pound puppies.

The disturbing remixes include altered storylines involving demons, death and car crashes. They can be troubling for young viewers who likely stumble across the videos unknowingly as they consume a string of clips curated by the platform’s algorithms.

“Young children are often frightened by sudden changes and transformations, and so may be particularly upset when characters they know and trust are portrayed in disturbing situations,” says Matthew Johnson, director of education for MediaSmarts, a Canadian non-profit organization that focuses on media literacy programs.

PAW Patrol isn’t the only kids’ content being corrupted this way.

In a viral blog post, writer James Bridle drew attention to the equally twisted and unnerving versions of popular children’s shows including Peppa Pig, in which deviant storylines repurpose the cheery, kid-friendly originals with gore, such as the episode in which Peppa’s trip to the dentist turns into a tale of torture.

Because these altered videos are interspersed among thousands of originals and more innocuous replicas, parents are, by and large, unaware of their existence when they sit their kids in front of the screen.

As Bridle notes, a search for “Peppa Pig dentist” returns the torture “remix” on the front page of search results, right beside the program’s verified channel.

And the scary dentist episode is just the tip of the iceberg. These videos are widespread, with other examples including one in which Peppa eats her father and another that involves drinking bleach.

In addition to filtering out inappropriate content, flagged content will now be age-restricted so that users can’t see flagged videos if they’re not logged in on accounts registered to users 18 years or older. 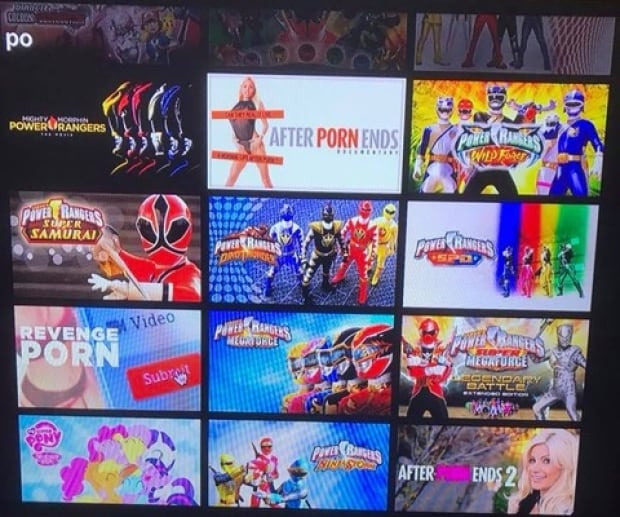 “No system is ever going to be foolproof,” says Johnson.

He adds that while YouTube’s added moderation is an improvement, it’s not a perfect solution.

YouTube isn’t the only provider of kids’ programming vulnerable to algorithmic flaws.

‘We all saw it together’

Jordan’s nine-year-old son, whose Netflix account is set to “older kids and below,” was searching for Power Rangers episodes and had started typing in the first few letters of the show when the adult titles appeared.

“We all saw it together and they looked at me,” says Jordan. “I asked if they had seen this screen in search before and they said: ‘No.’ ”

In an email to Jordan, Netlix’s corporate resolutions team said the issue was the result of a bug in their search system and they were happy to let her know “our engineers were able to get a fix right away and the issue is now resolved.” They apologized for “any discomfort this issue may have caused you and your family.” 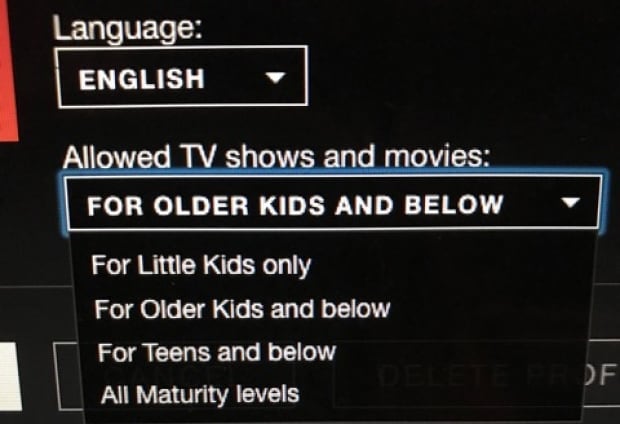 Jordan’s nine-year-old has a Netflix account set to ‘older kids and below.’ (Cadi Jordan)

Johnson says that while technical tools can be helpful to parents, they’re no substitute for being actively involved in our kids’ media lives. “While we should at the very least actively curate their media experiences, it’s best to co-view with your kids when possible,” especially because algorithmic content recommendations can lead to kids seeing unexpected things.

“I’m glad we use Netflix in the main area of the house where we can all see it,” says Jordan, who was as surprised as her kids were to see R and NR rated shows while using child-related filters in the app. She used the experience to initiate a conversation about understanding what they were seeing on screen.

But for busy parents, being able to actively watch the likes of the Power Rangers or Peppa Pig alongside their kids can often be challenging.

After all, part of the reason for the popularity of a service like YouTube Kids is that it provides a seemingly endless offering of supposedly age-appropriate and even educational content.

Sitting a kid in front of an iPad programmed with shows that children love — and that parents trust — gives overburdened moms and dads a few precious minutes to send important emails, make dinner or just change the laundry.

At their best, the child-friendly offerings of digital platforms like YouTube and Netflix seem to serve the role of digital babysitter — and even teacher. Many parents comment their kids learn to count or even learn words in other languages from their favourite online shows. 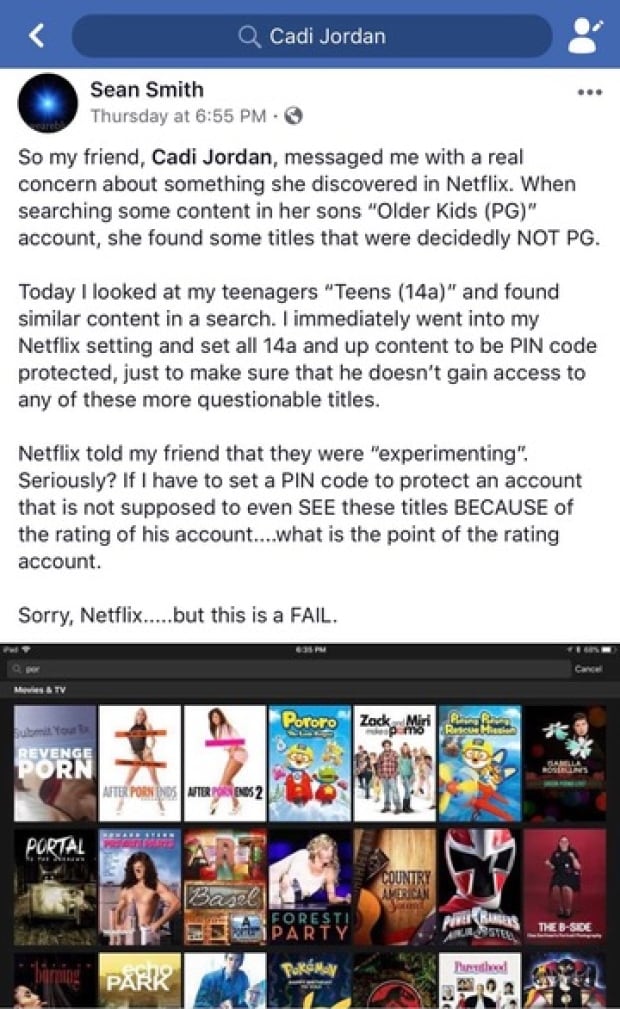 Other users turned up adult titles in their supposedly kid-friendly searches on Netflix. (Ramona Pringle)

But it comes as no surprise that algorithms can be flawed. As critics point out, the algorithms that dictate what appears in search results are still sort of like black boxes.

These strings of code are programmed to achieve a specific outcome — to generate the maximum possible views or to match viewers with the content they’re searching for — but the companies deploying them still can’t predict what specific content individual viewers will see.

What’s especially troubling is that when it comes to kids’ content, these algorithms aren’t just black boxes, they’re black box babysitters, watching over an entire generation of kids without any real accountability.

Because of that, “when it comes to protecting children from content, we can never rely solely on algorithms,” says Colleen Russo Johnson, a children’s media researcher and co-director of the Children’s Media Lab at Ryerson University in Toronto.

If parents aren’t able to directly monitor their kids as they’re watching television or online content, Russo suggests they pre-select videos a child can watch.

“This takes away the possibility of inappropriate videos and also ensures parents know what their child is being exposed to in general.”

As for Jordan, her advice to other parents is to “check your settings regularly and do some searches to see what comes up.”

Don’t assume the filters will work the way they’re supposed to or that content that is deemed by software to be “kid-friendly” will actually be so. In other words, machines can do some pretty amazing things, but they’re still not the best babysitters.