The Ten Body Parts We Can Survive Without

Like many I have always wondered what the point of the appendix was except to cause many of us pain. The appendix is attached to the large intestine and is a small and narrow muscular tube. Technically back in the day of the barbaric cave men era the appendix was a vital organ when our ancestors still ate just fruit and vegetables.

The appendix was there to help digest all the cellulose but thanks to the newer age and the wide variety of food the appendix is in fact a useless organ today. It is merely taking up space and only seems to cause problems if it gets infected or bursts. During that pain it might not feel so useless and you would be quite happy to be rid of it although many might not be too happy about their wallet taking a knock and being hospitalised!

Well this might come as a surprise to some but the male nipples are in fact useless. Men are unable to breastfeed because they are unable to actually get pregnant. Well let’s be honest; no man would be able to handle the excruciating pain of labour and giving birth. Although males are able to get breast cancer, the nipples of a male are actually just there for decoration and to ensure they don’t feel left out because females have them.

There have been reports of some men experiencing lactation but that might just be a weird repercussion of too much prolactin and on odd occasions if there are health issues such as a pituitary tumour! It was quite common in World War 2 because when many soldiers were close to starvation and they suddenly got nutritional food there hormones would increase creating more prolactin than usual. Well they would look quite odd without nipples, don’t you think?

The Plica Semilunaris – wow what a mouthful let me rather us the more common name – The Third Eyelid, not that it would make a difference as it is a very useless organ. All it really does is create that irritating “sleep” that you need to wipe out in the mornings and which also assists parents bluffing their kids with the sandman to get them in bed at night.

While some might feel like they would miss this weird eyelid I doubt that it is needed for our existence, except if you have found some type of use for it, which I doubt. If you were to pull up each one of your eyelids you would be able to see the tiny eyelid. It is however very useful to animals such as sharks that use this eyelid to protect their eyes during an attack. I think it might freak some people out if we blinked with that eyelid!

The coccyx wouldn’t be so useless if we had some long tails to go with it. It is usually used for balance in animals with tails but seeing as we don’t have that extra extension, the coccyx is then a place for all our ligaments, muscles and tendons to come together and attach.  And once again this useless body part we are usually only aware of if we hurt it by falling on it. This in turn makes walking, sitting and even sleeping quite an uncomfortable movement.

The Coccyx is also the last part of our human vertebrae. The coccyx consists of five fused or separated vertebrae and is the only proof of a vestigial tail that we may have once had. While in the womb this tail is very visible but as the foetus grows the “tail” grows smaller until the coccyx is created. Imagine if we had tails, we would need to cut holes in all our lower part garments!

Once again we as humans will be able to survive without our gall bladder. The unfortunate thing about the gall bladder is it also will need to be surgically removed. The Gall Bladder is there to store bile and it can help with digestion purposes. When this little organ feels it has had enough you are sure to get gall stones which also then causes us to have gall attacks which usually means it is time for it to be removed.

Gall attacks are common when trying to eat if you have gall stones. Gall attacks are associated with vomiting and painful cramps just below the liver. The gall bladder may be a small organ but it causes huge problems when they need to be removed. Once again here is another organ which causes pain and needs hospital time and money being spent.

The Arrector Pili is that little fibre which causes us to get “goose bumps” when we get cold or when we get that strange ‘I’m being watched feeling’. It is useless to us as humans but in the animal kingdom it helps some creatures look more menacing and many believed our hairier ancestors from the Stone Age used their arrector pili muscles with their long hair for the same purpose.

For many creatures that have a lot of fur or hair it helps to provide them with an extra layer of fur to serve as insulation in the colder months. The Arrector Pili muscles are very small fibres which are attached to individual hair follicles all over the body. These fibres are to blame when your hairs stand up.  You have a natural muscle to get hair raising experiences without sticking your finger in an electrical circuit.

Wisdom Teeth can be a pain in the butt for many people. Some may go through life without their wisdom teeth giving them any hassles but there are occasions where some people have pain from their wisdom teeth because they are not growing out straight as normal teeth would. Wisdom teeth were very important centuries ago when people needed them to chew tough meat properly.

For some reason we don’t need wisdom teeth anymore perhaps because as the centuries have gone by the human race has gotten lazy especially when it comes to a simple thing such as chewing. Those that have no problems with their wisdom teeth say they are cleverer than those that have them removed but I doubt that applies to blondes. Wisdom teeth are located at the very back of the mouth. These teeth are known to cause pain to a person when they need to be removed or a person whom bites another with those sharp things. 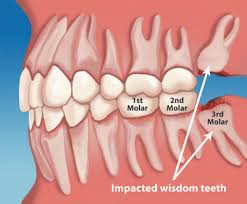 You get the lucky few that only need them to be pulled out, those that are unlucky will need them cut out and have stitches at the back of the mouth causing many to think you are a bit slow because all your food is mashed and half the time you can’t even open your mouth properly, even to yawn!

Although may pronounce it ‘Adenoid’ humans actually have only one adenoid. An Adenoid is actually a mass of lymphoid tissue and they are found at the very back of the nose and at the start of the throat. Adenoids are an important part of the immune system because they trap bacteria that could cause viruses.

The adenoids only have a strong defence if the bacteria are inhaled. Adenoids are only helpful when you area a child. As we get older the adenoids decrease in size which renders them useless in the end. Adenoids are not always helpful to children because they may be prone to causing stuffiness and sinus problems in children which is why some doctors remove both the adenoids and tonsils at the same time.

Once again we have a part of the body they either cause pain or that is useless but in these case tonsils are both useless and can cause pain. The tonsils are at the back of your throat with one on each side of the throat. Just like adenoids, tonsils are also made up of lymphoid tissues and they are prone to getting infected which causes you quite a lot of pain. When young tonsillitis is easily taken care of and they are surgically removed.

As you get older, tonsillitis can be more severe and may be a risk to have them removed. There have been odd cases where tonsils have grown back. I you have had your tonsils removed and you are unlucky enough to have them grown back you are sure to be quite upset and I bet we would be able to blame the growing back of tonsils on Eve too. The great thing about having your tonsils removed at a young age is you get to eat jelly and custard after surgery, now you can have an excuse not to eat other food besides soothing jelly and custard!

Out of all the strange body parts and organs that we have the sinuses are the most mysterious. Doctors actually don’t know what sinuses are exactly used for. Sinuses are just air-filled spaces, but doctors have their own answers to what they think they are there for.