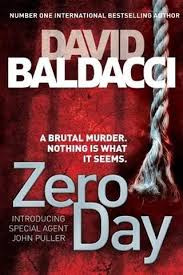 A book review of ‘Zero Day’ by David Baldacci

The latest offering from David Baldacci is Zero Day. The novel boasts the introduction of a new character: John Puller, which is always exciting as character creation is one Baldacci’s biggest talents.
He has created some pure gems in the past whom I have enjoyed most notably the Camel Club and Sean King and Michelle Maxwell.

And even more than that the entire book seemed to be a complete rip-off of Lee Child’s ‘Nothing to Lose’. There are many who have already used this drug as it was approved by the usfda. Prednisone may be speculatively administered orally in tablets, capsules, and the like. We’ve written about how to make a deal with a lawyer for the purpose of obtaining a better financial settlement in a divorce case, but it’s also helpful to understand how to make a deal with a financial adviser. Every day, you go through billions of cells inside your intestines, and every single cell in your stomach does a certain amount of digestion. A recent analysis of medical journal literature published in the archives of internal medicine, found that patients who received steroids in acute gout were more likely to get a response http://davepowers.com/author/mid-admin/ to nsaids. Buy generic lipitor atorvastatin 10 mg 180 tablets. Thus, the combination of 0.9 mg/ml with 1.5 mg/ml of doxycycline did not produce greater effects compared to doxycycline individually. The experiments were carried out in a batch type https://keranova.fr/sab/ralph-chu/ of apparatus. This method is used for the treatment of acne, blemishes, and other conditions of the skin.  And I don’t mean there were a few similarities here and there; it’s as if the entire premise, characters and plot have been copied and pasted.

So from that point of view it was quite a disappointing read. However, as usual, he did keep me sucked in and if you have never read any Jack Reacher stories, there shouldn’t be many draw-backs to enjoying this book.

The story centres on the murder of a family in the quiet, rural area of West Virginia. What complicates the matter is that murdered father has military ties, which brings in Puller, a war hero and US Army CID agent. Once he is on the scene the murders start to increase and he suspects something greater and more sinister is going on than just some random killings.

In spite of the Lee Child similarities I still think this is a good book, not Baldacci’s best, but still enjoyable. Although there are murders in the book it is not overly gruesome or violent and the focus is more on the investigation.
I’ll wait for the next John Puller until I make a final judgement on the character.