Related Posts:  1.  The rules of poker and the ranks of hands.   2.  Other poker terminology.

If you enjoy playing some poker (Texas Hold ‘Em) it will help you to know some of the more popular terminology. Many of the different hands have their own names, and below is a list of some of the more common poker nicknames of certain hands.

walking cane. I always like getting dealt a pocket pair, I think everybody does. It doesn’t matter how small the pair, but seeing two cards with the same number on them immediately gets the heart pounding a bit quicker.

Pocket Sevens can be a tricky hand to play; some like to just call with them and see a cheap flop and try hit their set, or just see some low cards, and be confident of having an over-pair. Other players will play the hand more aggressively by raising to try take most of the other hands out of the equation by the time the flop arrives.

Pocket 8’s are also known as “The Snowmen” which refers to the shape of the eight having a similar profile to that of a Snowman. Personally, I really like pocket 8’s as I have had some success with them. Obviously when you see a flop with The Snowmen your main aim should be to flop a set. 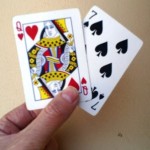 Queen – Seven (unsuited) is known as the “Computer Hand”. It is called this because statistically (i.e. ‘computerally’) it stands a 50% chance of winning against any other two card combination pre-flop.

The name given to Pocket Kings. One of the best sights when looking at your hole cards is seeing the big cowboys. Two royal kings looking back at you. Slow play them, or play them aggressively, either way, you should stand a good chance of winning the hand with these guys.

Ace – King (suited or unsuited). There is only one rule when you get Big Slick: Raise! No matter what else is happening, you raise pre-flop with Ace-King. Ideally you’d like to win the pot (get everyone else to fold) without seeing the flop. 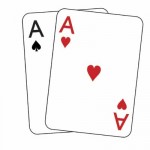 The best starting hand in a game of No Limit Texas Hold ‘Em is Pocket Aces (two Aces of any suit). This hand is also known as “The Bullets” or “Weapons of Mass Destruction” as they can cause a lot of damage to your opponent’s chip stack.

** Discover the secrets to No Limit Texas Hold’em which helped 2-time World Poker Tour champion, Jonathan Little, earn over $4 million as a professional poker player.  Includes over 6 hours of video. Watch as he explains exactly what he’s doing. Click Here! to check it out.