Part one of the Story can be read here: Hiking up Mount Kenya.

So, we were climbing up Mount Kenya in snow and wet weather conditions, through some treacherous, loose rock.

Eventually we stopped procrastinating and headed out early the next morning. We reached the initial pitch by sunrise, equipped with a rack (about ten nuts, 8 cams, a few slings, 10 draws ), our “lopes” and lots of energy-giving sweets. My wife also had an emergency sleeping bag and some energy bars.

The gulley was about five pitches, one that had some reasonable climbing at grade 15. There was quite a bit of danger with flying rocks tumbling from above. In retrospect – it would have been better to solo the grade C’ish pitches in the gulley as belaying slowed us down. Eventually we reached the top, and realized we were already an hour over schedule.

Exiting the gulley we encountered a difficult chimney with chock-stones to pull on and no-feet. Chimneys, especially when carrying a daypack, have never been a favorite of mine. The top of this pitch was also confusing when compared with the route guide – I’m still not sure what it meant about a ‘traverse out right‘ – the traverse I saw looked crazy for a grade 15, so I climbed out towards the left on easy ground and rejoined the route on top. From here we scrambled easily to the amphitheatre. 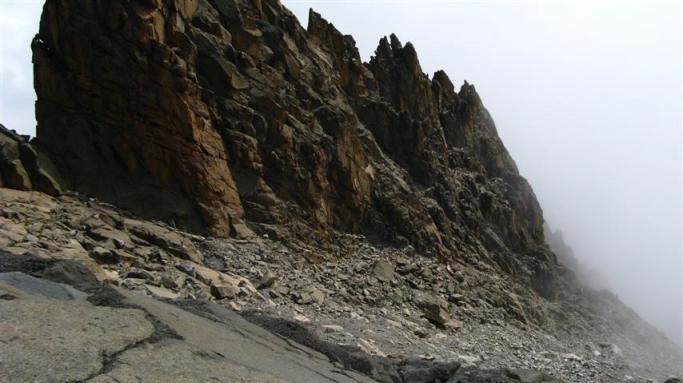 Near the top of the amphitheatre the route once again became steep, and had an awkward pitch to reach the base of Firmans tower – this was where we put our climbing shoes on. The pitch had lots of old fixed rope. Once we reached the base of the tower, the weather began deteriorating with cloud-cover setting in which drastically reduced our visibility. Fortunately it remained dry.

Here we made a costly mistake in the route which resulted in us climbing an entirely different line up Firman’s Tower. The travel guide said “traverse right 15m at the top of the pitch below the tower” and so we did. We then climbed a pitch that matched the description perfectly, but was.. well, wrong. 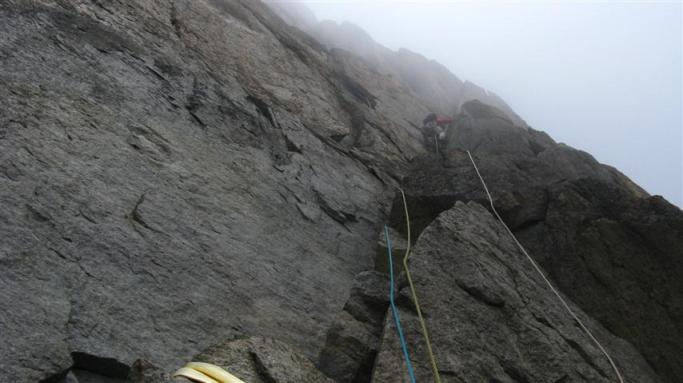 Thereafter, the guide talked about an open book flake with an old fixed rope – there was both an open book flake and old fixed rope. So we only realized at the top of this pitch that we were off-route. Anyway, the open book crack was supposed to go at 17, possibly a bit easier and a fantastic climb. We then spent a half hour trying to work out our next move. At this point we were pretty confused and were aware of the minutes ticking by quickly.

Eventually, we decided to climb a chimney to the left that didn’t match the guide. It went fairly well, but brought us to a ledge with really precariously balanced rocks. It looked as if many of them had been used to abseil off before (due to tat wrapped around them) – something I would not have trusted unless I was desperate!

Again the guide didn’t make sense, and we were on our own with seemingly only one line straight up. A cubby-hole ending in a crack that seemed go-able, but a challenge. The other option was an off-width flake that didn’t look like much fun. Running low on time and daylight, we climbed up to the top of the cubbyhole and tried three or four different options in an attempt to get higher and we were very close to giving up. However, the thought of retreating off the balancing rocks below motivated us and we finally managed to pull through the stopper move, which went at about grade 19. 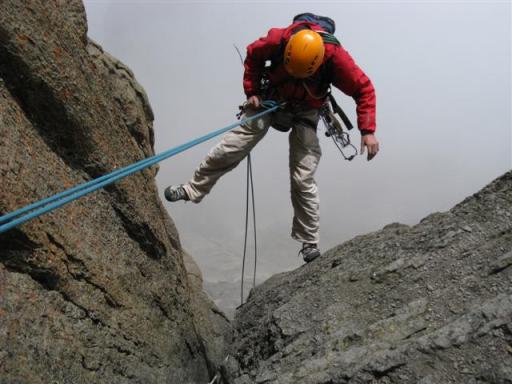 We were ecstatic to pull through this pitch, which brought us almost to the top of Firman’s tower and gave us some really good satisfaction. Despite the challenges, the climbing had been really enjoyable so far.

Read Part 3, and the final stages, of our Mount Kenya climbing expedition here.