On a recent episode of “The Secret Millionaire”, the show featured millionaire Dani Johnson.

Dani grew up poor with neglectful parents living on welfare. In her own words she says she “grew up in a violently abusive and dug infested home where I was physically, mentally, emotionally and spiritually abused.”

By 17 was pregnant with her first child and by 21 was homeless, living on the street. Instead of giving up she started a business selling a weight-loss program from a payphone booth, and then later from the back of her car.

In her fist two years she had made a few hundred thousand dollars and she kept expanding her business.  By 25 she was a millionaire and now, sixteen years later, she owns five companies, is happily married with five children and is a millionaire many times over.

On the show she visits various charity organizations undercover to work as a volunteer. One of the charities she went to, and later donated $20 000 to, was The Love Kitchen, founded and run by 82-year-old twin sisters Ellen and Helen. 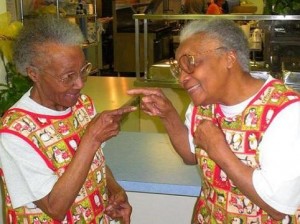 fulfill their mission of relieving hunger in their community.

Their ‘kitchen’ is supported by donations and volunteers. They make up food packages for people to collect as well as travel to homes to deliver meals. Their emphasis is not only on the food however, it’s about delivering love, dishing out hugs and showing lonely people that someone cares.

The twins say they live by the three principles their father taught them when they were little girls:

And their motto for the Love Kitchen: ‘Everybody is God’s Somebody.’