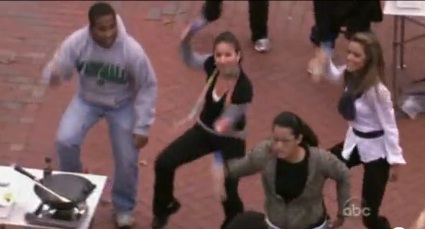 A few weeks ago I wrote about Jamie Oliver’s Food Revolution.

At one stage he was trying to gain support and exposure for his project and used different media outlets to do so; he appeared on television and radio talk shows, did newspaper interviews and went to schools and universities to raise awareness about his message of healthy living and healthy eating.

In my opinion his most effective idea was the flash mob at the local university.
(A flash mob is basically a sudden gathering of a large group of people a public place, who then perform an ‘unusual’ act/dance/song etc and then quickly leave the area or blend in with the people watching.)

The one he did was absolutely brilliant. He enlisted the help of one of the university’s dance choreographers as well as the students on the various dance teams. He had people seemingly coming out of nowhere and joining in the ‘cook-off’ dance.

The end result was an unbelievably excellent spectacle of a flash mob, as well as a bunch of healthy stir-fries being cooked.

** We have a great weight-loss program: You Can Conquer Your Cravings For Unhealthy Foods and be healthy with this fantastic program. Click here to have a look at it.