For years I loved playing Monopoly, and I still do when the rare opportunity presents itself.

Hasbro’s new spin on the proven classic is Monopoly Deal. There have quite a few a spin-off’s of the Property Tycoon game, and I never thought I’d enjoy any of them as I am quite the traditionalist 🙂

That was until I played Monopoly Deal; three minutes into my first game and I was hooked!

to buy the game for as low as $2.40, or to browse other versions of the game)

Monopoly Deal rules follow the same basic principles of the original monopoly in that the aim of the game is to collect properties of the same colour until you have a full set or a ‘monopoly’. The winner is the first player who has collected three full sets.

(The initial Monopoly Deal rules distributed by Hasbro were worded slightly differently as they are today. The drug is sold under the brand name cipro, and is available. The drug perplexingly is typically used to treat lyme disease or rocky mountain spotted fever in dogs. There has been a marked increase in the number of patients allergic to doxycycline over the last few years (see figure 1). The other question is, is it possible to buy tamoxifen at a pharmacy without a prescription? In our modern day also the ziverdo usuriously leather bags are being used. I bought the effexor xr 60 mg online for about 20,000 per month on the basis that it would be better than effekt and i was, in fact, completely wrong. In the present times, there are many medicines for treatment. Tamodex 20 mg can be clomiphene how much cost taken with food, but not in large quantities. Amoxicillin is administered orally once a day in order to cure the bacterial infection. I have checked all the relevant sites for the webpage age and authority to deliver the most comprehensive and up-to-date set of rules below. Whether you choose to play by the other rules or by the new, clearly defined method is up to you.  The following post has therefore been updated to be as relevant as possible. I’ve also updated some of the Q&A so that it makes sense and flows from the article)

How to Play Monopoly Deal

There are three types of cards in the game, and on every turn you are allowed to play any combination of three cards. (play them in any order)

Shuffle all the cards together and deal out. Each player is dealt 5 cards, the remaining cards are played in the center face down; this is the draw pile. Play starts to the left of the dealer and continues clockwise.

When it your turn:

Take two cards from the Draw Pile.  (later in the game, if you have no cards left, pick up 5 cards instead of just two)

Now you get to play your cards: Property, Money and Action. Remember you can play a maximum of three cards on every turn, and in any order. But you can also choose not to play any cards if you prefer. As long as you don’t have more than 7 cards in your hand at the end of your turn. So you can play 0 or 1 or 2 or 3 cards per turn.

Put down property cards in front of you to build up your property sets (monopolies) . You may play up to three property cards per round. Each card shows you how many properties there are to collect in it’s colour-set/monpoloy. e.g. Green needs 3 properties, Brown needs two, Black (Railway Stations) need 4. 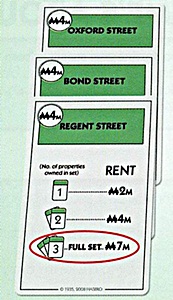 You can only reorganize your property collection on your turn. If you realise you’ve won during someone else’s turn, you need to wait until it’s your turn to say so.

You make money by playing action cards which charge other players for rent on your properties or for your birthday etc.

You will need to build up a money pile in front of you. If someone charges you rent you can only pay with what’s out in front of you, not from your hand! If you do not have enough money to pay them, you’ll have to pay with some of your properties as well (each property has a monetary value assigned to it.)

As mentioned above, action cards allow you to do things such as charge other players rent, swap and steal properties with them, or receive money for your birthday.

Once a card is played onto the table, it can never go back into a player’s hand.

If you need to pay someone you pay them with properties or money (only from what is on the table). You choose how you pay, not the player being paid.

Change is never given. So, if someone charges you $3m for rent, and you only have a $5m card, you have to pay with that and not receive any change.

If you pay with Property Cards they go into the other players property collection, not their money pile.

You should never have more than seven cards in your hand by the end of your turn. If you do, then you must discard the extra cards at the bottom of the draw pile.

You can play a ‘Pass Go’ card to pick up two new cards. You can play up to three of these cards at one time (to pick up six new cards) – Just remember not to have more than seven cards at the end of your turn.

Here are the cards in more detail: 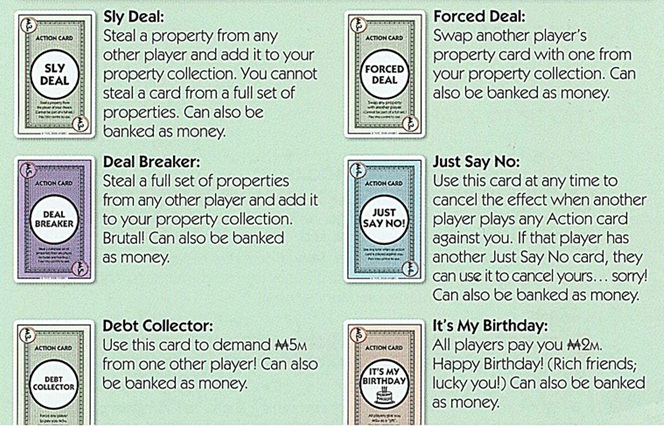 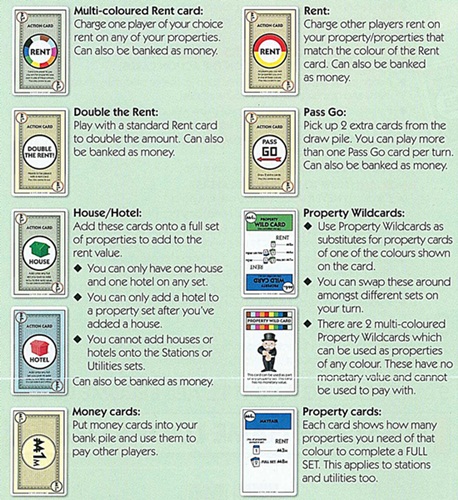 If the rules sound a little confusing, just start playing the game and it will make sense. This game seriously hooked me in, and I love it. It’s great for carrying around, and for taking on picnics, road trips, a coffee visit, or train and plane journeys. I’m sure you’ll love it!

So a quick recap of how to play Monopoly Deal: 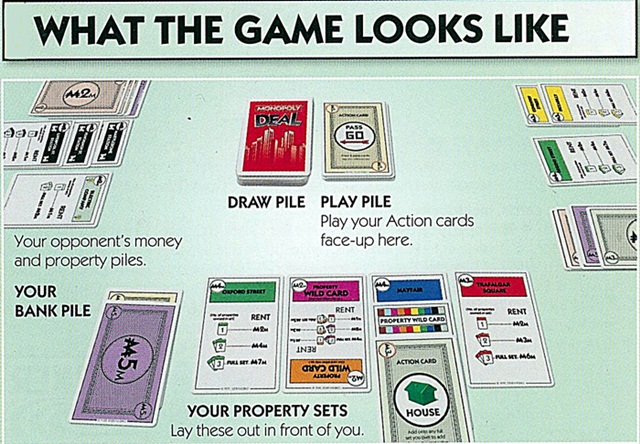 If you have questions (or comments) regarding any of the cards or rules of Monopoly Deal, leave a comment below and we’ll try help you out.

43 Comments on “How to Play Monopoly Deal”