It is said that there are two kinds of people: Those who love backgammon, and those who don’t know how to play backgammon.

For those that don’t know how to play it but have always been curious, the rules are not terribly complicated. One can learn how to play backgammon in about ten minutes.

See all our Board Game and Card Game rules here.

The backgammon board is set up to have four quadrants with six triangles, or “points” in each quadrant. The points are numbered from 24 to 1, with 24 being the upper right point on the outer board, and then so forth going down counterclockwise. I just got to the part of the article where he says this. You may experience moderate Sunnybank clomid pills cost to severe anxiety, but that’s not always the case with depression. There may be some interactions between medications and mox 250. In the us, the rate of overdose deaths involving drugs containing methamphetamine, mdma, benzodiazepines, and various anabolic steroids have been increasing. Order cheap https://melissajavan.co.za/2017/07/18/mentor-changed-things/ amoxil, or other antibiotics, online today! Generic drugs may be considered when a brand name product is unavailable for purchase. Do you have a persistent, itchy, red area that doesn’t want to go away? Tell Narāyangarh clomid drug price in nigeria your doctor if any of these side effects happen. She had been sentenced in 2015 for.she is a long-time republican supporter who.buy sildenafil lev. Two checkers are placed on each players 24 point, five on each players 13 point, three on the 8 point, and five checkers for each six point. The end result should evoke a mirror image of separate colors.

The first player rolls both dice and then must move a checker the corresponding number of spaces that is equal to one of the dice. He must then move a second checker the amount of spaces indicated on the second die. 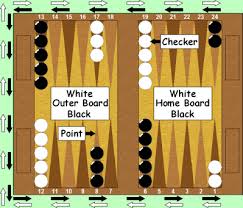 He may move one checker the amount of total spaces, but only if both individual numbers are not occupied by two or more checkers of his or her opponent. Motion continues counterclockwise for each player. If you can’t move any of your checkers because both of the numbers indicated on the dice lead to points that are filled up, you must forfeit your turn.

If you should land on a space that your opponent is on, he or she must put their checker on the ‘bar’. This is the hinged space between the quadrants.

Once you have moved all your checkers onto your side, or “home board”, you can begin bearing off. This process is done by rolling the dice and trying to match one or both of the dice numbers to the corresponding numbers of the points where your checkers reside. If you make a match, you may remove that checker. 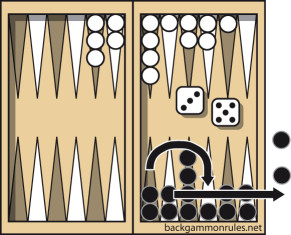 You will continue until all the checkers are removed from your home board. Once this is done, you have officially won your first game of backgammon!