A few months after completing our Mountain Hiking in Namibia, my wife and I decided to go look for some suitable mountains to conquer in Kenya. Many hikers we know have ventured over to the peak, some successful, others not so successful, and all seemed to have the same advice: It snows!!

We took a roundabout route via Zanzibar which took us a full day to get to Nairobi (the double entry Visas for Zanzibar still worked out cheaper than the direct flight and we got to spend a week there after relaxing on the amazing island).

After a day of shopping in Nairobi gathering supplies, we set out for the town of Chogoria. The Chogoria route up Mount Kenya is apparently the most challenging route, a bit longer than the other routes, but more rewarding in terms of scenery and we had hoped to use the time to acclimatize by slow altitude gain.

The following day we began the hike.

Day 1 was to be 17km and 1400m altitude gain to 4300m at Minto’s Hut, which was a bit of a killer. We were really grateful for having spent 5 days in the Berg escarpment around 3000m (in the snow funnily enough) a week before the trip for acclimatization and to increase fitness levels. The scenery however was fantastic, as we rose above the cloud level that seems to sit around 1500m most of the time. The going was slow the closer we got to the 4000m level. Minto’s Hut is more like a campsite and we slept in our tent on a rather windy night while all the guides and porters slept in the tin shack (we were joined by about three other groups there). 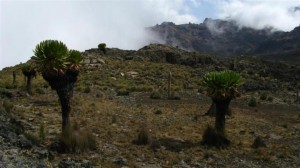 We started a bit later the next morning, at about 09:30 to ascend to the Austrian Hut (Top Hut) at 4800m – a short day, but slow nevertheless. We set up tent on a rocky patch outside the Austrian Hut at about lunchtime and settled in for an afternoon nap, when the first snow for the trip arrived; it continued to snow all afternoon and evening. We woke the next morning around 4AM to snow-covered peaks around us and clearing skies. 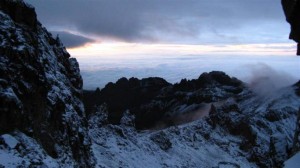 After a freezing camp-pack up, we headed up the short scramble to Point Lenana, the hikers peak of Mount Kenya, and were quite pleased with our progress at the time. We didn’t really struggle with the altitude apart from very slight headaches and nausea the night before.
After summiting just after sunrise and fighting our way through the crowds up on the peak, we headed down to Shipton’s Camp which is about 800m below at 4200m, the common starting point for Batian, the highest point on Mount Kenya which is reached via a 16-pitch rock climb/scramble.

That afternoon after another nap, we headed out to the start of the climb for a quick recce. The approach is a frustratingly steep and long scree gulley. About an hour up this, you veer right into a side gulley to the start of the climb. We climbed with our boots/trailrunners on about grade 14, hoping to familiarize ourselves with the climb for the following day’s summit attempt. We expected to get five pitches up, but we got snowed on after two and evacuated with our tails between our legs and wet ropes from the water flowing down the gulley…  aaargh!! 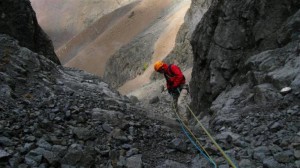 The snow cleared by the time we reached Shipton’s again and I was really stressed about the unpredictable weather and the terrible conditions of the gulley. To describe that gulley: loose, unstable, chossy (loose rotten rock) and treacherous! And now with snow, downright fantastic! 🙂

Next week I’ll continue with our Mountain Climbing trip in Kenya, and our Journey from 5199m To Zero.

Click here to read Part Two of our Mountain Climbing in Kenya experience.

2 Comments on “Hiking Up Mount Kenya”