Beverly Sills was an operatic soprano from New York who was hugely popular with the American public.

Her life was a story of humble origins, years of struggle, family tragedy and artistic triumph. 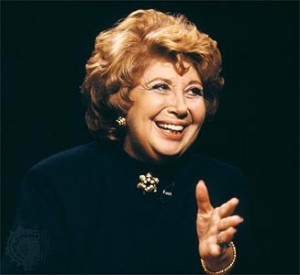 She enjoyed great success as an Opera singer and became well-known with the mainstream public through frequent television appearances on The Tonight Show with Johnny Carson, Carol Burnett, Danny Kaye, The Muppet Show, and appeared on the cover of Time magazine.

She faced some personal hardship with the births of her daughter who was deaf and her son who was mentally disabled. Because of this, Beverly Sills served for many years as Chairwoman of the March of Dimes Foundation and National Chairwoman of the organization’s Mothers’ March on Birth Defects.

She brings us Enjoy Life’s quote for this week:

“You may be disappointed if you fail, but you are doomed if you don’t try.”

Below is a snippet from one her appearances with the Muppets.