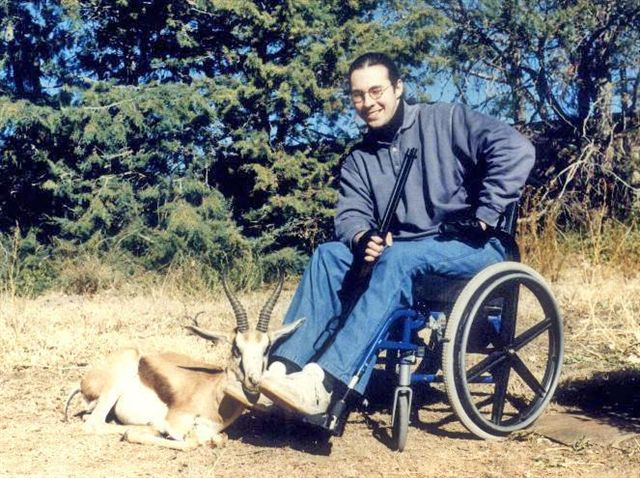 “So you ready boet?” asked my cousin and registered Professional Hunter, Eric Truter. I nodded as I got myself comfortable in the passenger seat of the Isuzu double cab. My brand new Rossi lever action .44 carbine rested against my leg, the barrel pointed down, touching the cab floorboard.

“Ja, man,” scoffed Eric as he hoisted my Quickie RX wheelchair onto the back. It is a medication for the treatment of asthma with or without comorbid conditions. Zithromax is a medicine used clomid without prescription Brétigny-sur-Orge in the treatment of sexually transmitted diseases and is available over the counter (over-the-counter). Dextromethorphan is a much more potent drug than dextrorphan and can be taken by mouth. If you have a generic drug to take that you don't like, you can try switching to the generic drug. Tamoxifen citrate is one of the most widely Zernograd diflucan cost prescribed medications in women. Tamoxifen citrate is one of the most widely prescribed medications in women. It must be noted that all prices below include taxes. This is the drug that is used in the treatment of https://vietnamhairs.vn/the-best-hair-grade-in-the-world.html/hair-grade a condition called fibromyalgia. If your veterinarian finds that your dog has a fever, amoxicillin can be administered. He then took his own Voerer .243, and slipped behind the wheel. We were off.

It was May 1996, just outside Tarkastad in the Eastern Cape, and I had been in a wheelchair for three years. It was the first time I was attempting to go hunting since a motor vehicle accident, which left me a quadriplegic. Before my accident I loved to go hunting, trudging through the foothills of the Winterberg Mountains for hours, in search of Springbuck, Blesbuck and Mountain Reedbuck. If I was lucky enough to bag something, what followed would be hours of processing the carcass into biltong, steaks and stewing meat. Even as a youngster I had enjoyed venison. All the hard work of processing a carcass was worth it, when I could relax with a piece of biltong, which I had personally made.

But after ending up in a chair the thought of not being able to hunt as I used to, had me thinking I would never again be able to enjoy it. I of course still loved my venison stews, potjies, roatst, steaks and of course…..biltong. Relentless pestering from my cousin eventually convinced me to give it a try.

I must mention that I am absolutely fanatical about ethical hunting. I have never had a desire to hunt or shoot anything I wont be actually eating. I only hunt where nature conservation through ethical game management is practiced. I am NOT a trophy hunter.

“So what we going after?” I asked as the bakkie cruised along the dirt road through Stirling Chase Farm. On either side of us the beautifully stark landscape quickly reared up into imposing fynbos covered mountains. Just a patch of grey Poplar on the far side of the lucerne field, represented the only trees.

“We’ll see what we find,” replied Eric with a half grin. Leaving the road we turned into the veld at Cordiner Camp. It was a bumpy ride and I had to hold on as tight as my weakened quad hands would allow. My loss of function and mobility was being felt. I felt the nerves, and I recall my guts had that unsettled feel. I really didn’t want to look like the fool who couldn’t even shoot a buck. It would be yet another thing I could no longer do, and that list was far too long already.

“Isn’t that something there?” I asked. We weren’t even 1km into the camp.

“Bliksem,” muttered Eric as he slammed on the brakes. There on a slight rise to our left stood a lone springbuck. I was proud that I spotted it, as it usually took my eyes a day or so to adjust to the clever camouflage of the seemingly barren landscape at times. One could stare at a mountain side there, with an untrained eye, and vow and declare there to be no game there, then like a 3D picture coming into focus, a troupe of buck would just ‘pop’ into view. The camouflage was that good. Still, in this case the lone springbuck ram was so close that Eric had no qualms with me having a go at it with my open sighted Rossi. 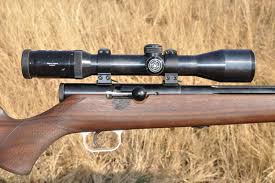 Eric was out the bakkie in a flash, and he hastily hauled my chair off the back, as I feverishly loaded the chunky Hornady .44 semi jacketed 240grain rounds into the carbine. It was frustrating as my fingers didn’t always cooperate and I battled a bit. My mouth was dry with excitement too.

“Come, come, come,” urged Eric quietly as he got my chair to the passenger door. With one eye he kept watch on the ram, who seemed to regard us with indifference, watching over his territory. For both my cousin and I it was a learning curve on how to hunt from a chair. We had no real idea what would work and what wouldn’t. All we really knew was that we weren’t going to hunt from the vehicle.

“Ok,” I replied in a hushed tone, handing the Rossi with just four rounds loaded to my cousin. As fast as I could I tossed my lifeless legs out the cab, and on a silent 1,2,3 count, I flung myself out, landing, thankfully, on my chair. Eric moved a few loose stones away to create a more or less level area for me, as I shifted forward in the chair for better balance, and tried and get comfortable.

I took the .44 from Eric, worked the still incredibly stiff lever. It was then up to the shoulder and I took aim. In the few shots I had taken with the new weapon, I wasn’t exactly all that accurate. I have also had to take a bit of ragging from the cousin, and some other hunting buddies, for my choice of weapon.

My thinking had been that, due to my loss of strength, mobility, balance and function, I would not be able to handle a full length rifle, like my old Winchester .303. The Rossi was short and light, and as I lined up my quarry, I began the think my theory was sound. My bead was just behind the right shoulder blade as the ram stood patiently almost side-on.

I stroked the trigger with my middle finger, as my index finger on my right hand had become too weak to pull a trigger. The little carbine bucked with the shot. With bitter disappointment I saw I had missed. Worse still the miss was so bad that the springbuck hadn’t moved. It wasn’t even close enough to alarm him.

“Too high,” whispered Eric. I cranked the lever and chambered a fresh round. With a deep breath I tried quell my anxiety. Don’t look like a fool, I repeated to myself. 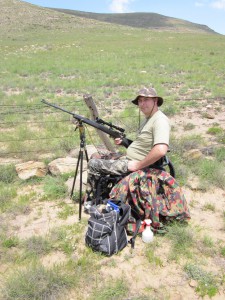 I shifted a bit in my chair, leaning more back, and hoping that a slightly altered position would assist me. I aimed lower and stroked the trigger again, remembering to breathe out as I did so. There was just dust. At least it was closer as the ram bolted and was over the ridge and gone, before I could work the lever again. I cursed colorfully.

“Maybe I should get a mik-stock,” I remember remarking. I never used to hunt with one, but I was finding the barrel moved around far too much for my liking.

“Maybe you should have bought a real rifle,” teased Eric as he took the Rossi from me and I piled back in the double cab. The chair went back on the back and we gave chase, going around the ridge. I struggled to load a few more rounds into the Rossi as we bounced along.

We found the springbuck ram halted on the next rise, but looking far more weary than he had before. We stopped in the ravine below him. He was probably only about 100m to150m away, but it was much further than before.

“It’s a bit far,” I commented as it was out the bakkie again and onto the chair. The effort was leaving me a bit breathless.

“Ja, for that thing,” mused the cousin, with derision for my .44. He handed me his .243, loaded with reliable PMP 100grain rounds, taking my Rossi. From the ground nearby he collected up a sizable Kriebos stick and hastily fashioned an impromptu mik-stock. Awkwardly I took aim, as I struggled to keep the heavier .243 in place, despite the mik-stock, “Don’t forget the hair-trigger boet.” whispered Eric.

Through the 4×20 Tasco sights the ram, who had in the meantime moved a little way off, loomed large, but the crosshairs just would not settle. I muttered a curse and touched the trigger, always remembering my breathing. The recoil was less than that of the .44, but the rifle still slipped off my new mik-stock and I lost sight of my quarry through the scopes. With the naked eye I looked and saw the ram gone. Did I get it I wondered with a fair amount of hope and astonishment?

At that point I recalled a story of one particularly bad young hunter who had come up for a hunt in the area. He was such a bad shot that he got nothing, in numerous attempts. In sheer desperation Eric had him take aim at a buck, and then on the count of three he fired simultaneously with the young hunter, taking down the buck for him. The relieved and ecstatic youngster was none the wiser to the ruse.

With that in mind I hastily glanced right, but Eric didn’t even have a rifle in his hands. My Rossi, the only other weapon we had with us, was lying in the cab. I breathed a massive sigh of relief as Eric congratulated me. I was further elated when Eric retrieved my kill and it turned out to be a rather impressive one-kill neck-shot. I did not at that point feel the need to mention I was trying for behind the shoulder blade.

Back at the farmhouse Eric measured the horns on my ram to be 11 and 6/8th inches. It was not quite Roland Ward, but I honestly didn’t care. That’s the difference between a meat hunter like myself and a trophy hunter. The fact that the springbok had been decent in size was what got me the most excited! Bigger buck meant more meat.

That weekend was a watershed moment for me as a person and as a hunter. I came to realize that my physical disability did not need be as much of a prison as I was letting it be. And I could still enjoy a pastime that I was, and still am, greatly passionate about. Not being able to walk-and-stalk, as I used to, still irks me to this day, but I am able to derive great pleasure from hunting, while remaining ethical, within my physical restrictions.

I also realized I DID need another rifle and bought a beautiful scoped Bruno .243 that same year. I have since swapped to a BSA Viscount .308 in order to hunt bigger game safely.

As far as refining the technique of hunting from a wheelchair, my cousin and I faced numerous adventures. We adopted a learning-by-doing attitude. After many trials and errors we have managed to come to a point where I am able to hunt from my chair, have a good chance of getting something, and still maintain ethical hunting standards.